Buengo aims to disrupt the way non-profits and individuals raise money for the causes they care about.  I joined the project on its very early stages to help produce an app where users could buy & sell used items and donate the proceeds to good causes.

When I joined the project, the two founders had already produced a first unfinished version of the app, with plenty of room to improve in terms of user experience and aesthetics.

I took the responsibility then to start from scratch, rethink and redesign the whole information architecture, interactions and UI elements, with a user-centered approach.

The goal: transform the app into a useful and usable tool for buyers, sellers and causes.

I started by focusing on understanding the different user flows. What were their goals, jobs and actions to be taken within the app and how we should organise them. The challenge was to combine two completely different features into one single product:

Buengo aimed to allow users to create a personal profile to sell their products, buy products and launch fundraising campaigns, either personal or on behalf of an organisation.

It also aimed to allow NGOs, schools or any kind of association to set up an organisation profile and let users create campaigns on their behalf. (For the MVP however, we decided to register organisations and enter them manually).

Since Buengo is a very ambitious project in terms of the number of different actions that can be performed through the app, we will focus only on the three main jobs to be done: buy, sell and launch a campaign and how it affected the new IA.

From the user flows, previous research and an extensive competition benchmark, I produced wireframes of the different screens to have a basic outline.

As I will explain in the next step, I then put together a prototype with the wireframes and ran a user test to get insights and iterate designs.

To better explain the screens and flows I will use final design mockups. 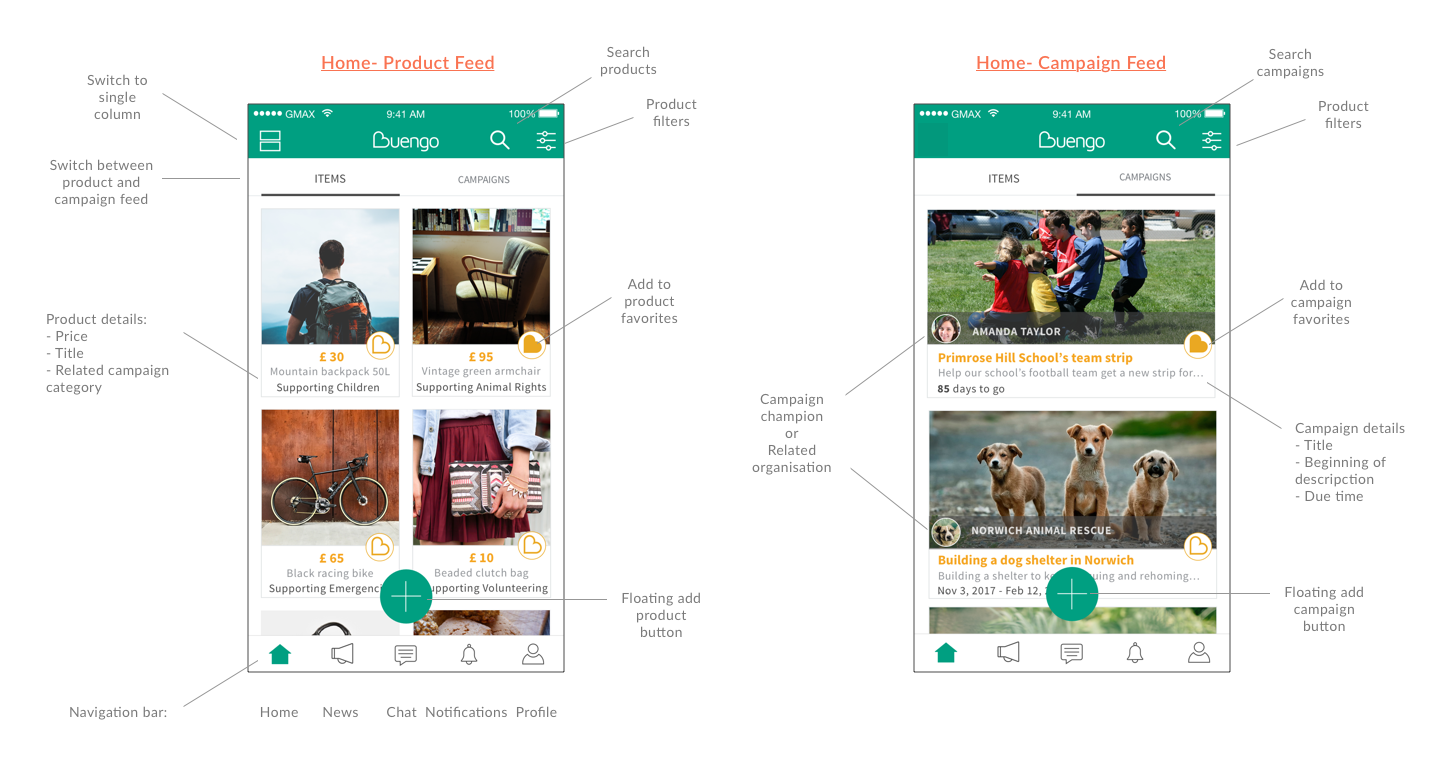 I designed a two-tab homescreen to change between the products feed (Items in the app) and the campaigns feed. Each one with its own filter and search button to easily find a specific product or campaign, and an “add” floating button to quickly create a new posting.

I also placed all the main screens in a bottom navbar, instead of the hamburger menu, to have faster access to the different sections. The idea was to let users reach their goals, and see relevant information as easy and quick as possible.

I introduced a two-column layout for products and decided to show the related campaign category in each of the product cells. This way uninvolved buyers would have an idea of where the money would go without going too much into detail. 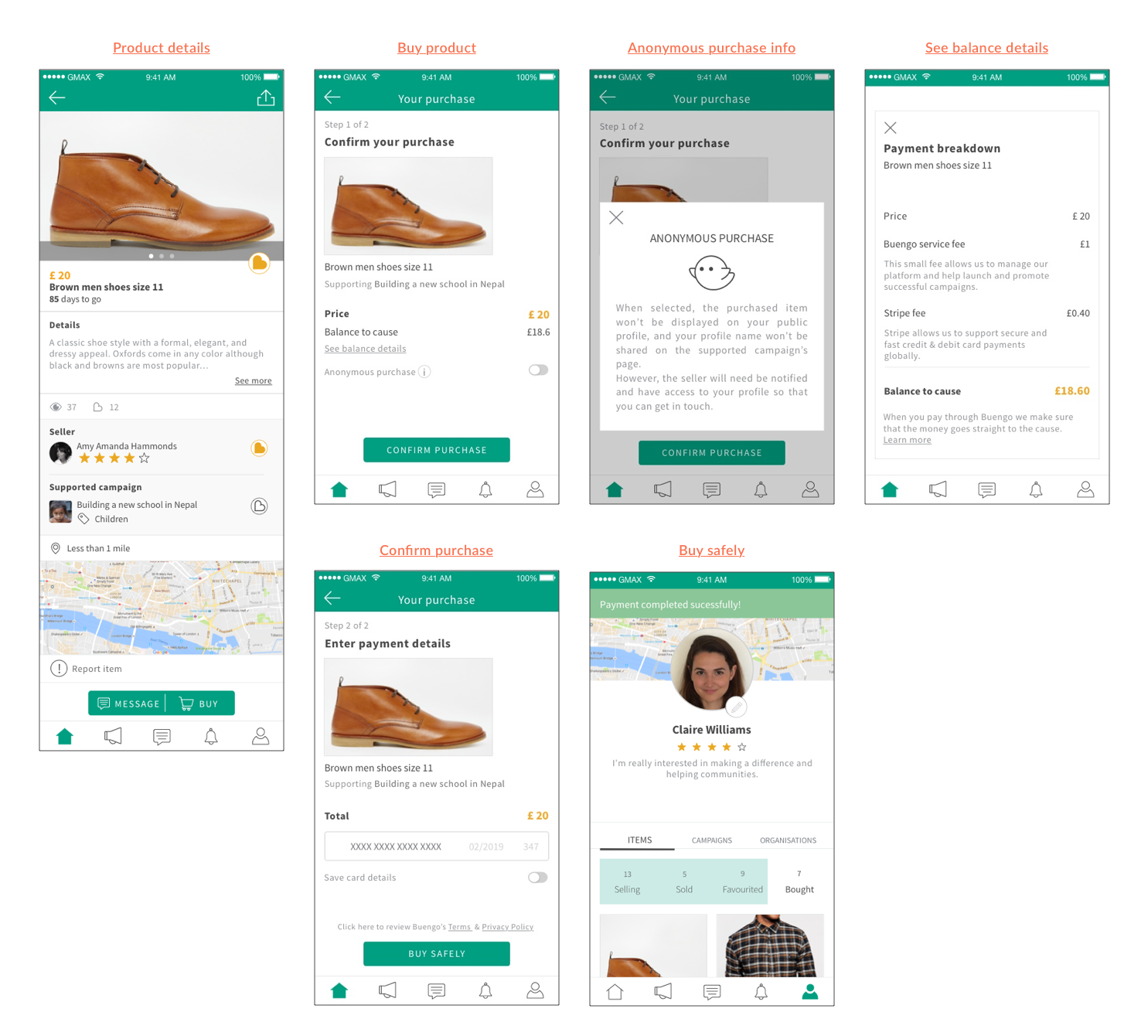 The product detail screen contains all the basic information of the product and the seller, as well as the related campaign so that the buyer can see where her or his money will go to.

Buengo charges a small fee for every sale made through the app. Since we wanted to promote transparency, I designed a screen with the payment breakdown carefully explaining every line to help avoid frustration from the buyer.

On the add a new campaign form (and the one for a new product too), I worked on the copy to make it more conversational instead of the usual “Name” and “Description” placeholders.

To show that campaigns could be either personal, or for the benefit of an organisation, I placed a switch to give access to the organisation list.

Before producing the final mockups, I ran a test with two different kinds of users: second hand marketplace consumers and charity employees.

I prepared two different prototypes to be able to test as many screens and functionalities as possible: the purchase of a product from a specific campaign and the launch of a new organisation campaign.

From the test we got valuable feedback that confirmed that users found the app intuitive and easy to use. Buyers would look for the product both by filtering results on the product feed, and by searching first on the campaign feed, which confirmed the buyers flowchart I had defined.

Charity employees provided very important feedback regarding the creation of a campaign on behalf of an organisation: campaigns had to be approved first. That’s why we worked on a functionality to allow organisation managers to receive campaign requests before being published on the app.

I then modified the campaign launch flow accordingly, changing “Launch campaign” button to “Continue” when an organisation was selected, and showing an information message to let the user know the posting was on hold. 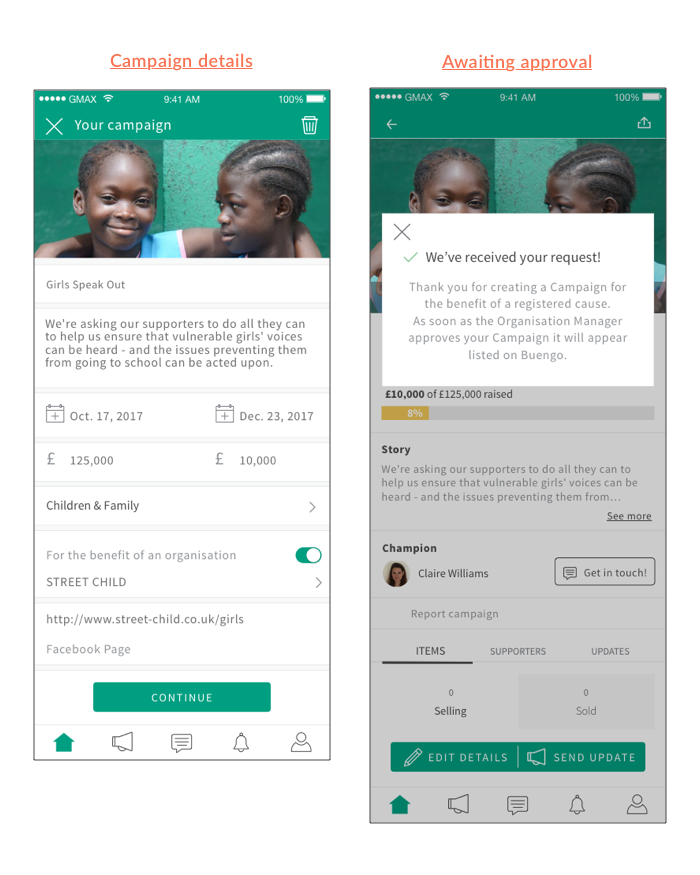 Once all screens were designed, I worked on the final mockups for the onboarding flow and the visual and copywriting content for the app stores.

Before the launch, I worked as well managing the QA testing phase, producing the different test scripts and analysing feedback in order to iterate designs for a version 2 of the app.

Thank you for reaching this far, any comments or questions? 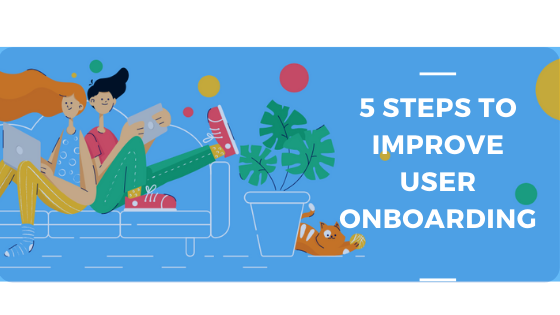